Ashutosh Kumar is Associate Professor of History at Banaras Hindu University, Varanasi. He was a fellow at the University of Leeds, United Kingdom, the Centre for the Study of Developing Societies (CSDS), New Delhi, the Centre for the Study of Slavery, Resistance and Abolition at Yale University, and Indian Institute of Advanced Study, Shimla. He has published many books, and articles in international peer-reviewed journals. His most recent publications include Coolies of the Empire: Indentured Indians in the Sugar Colonies, 1830-1920’, Cambridge University Press, 2017; ‘The Indian Labour Diaspora’ (authored with Professor Crispin Bates), Edinburgh University Press, 2017 and ‘Indian Soldiers in the First World War: Re-visiting a Global Conflict’  (edited with Professor Claude Markovits) from Routledge, 2020. 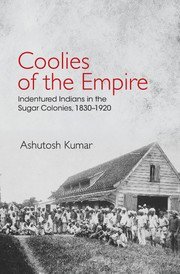 This book studies Indian overseas labour migration in the nineteenth and early twentieth centuries, which involved millions of Indians traversing the globe in the age of empire, subsequent to the abolition of slavery in 1833. This migration led to the presence of Indians and their culture being felt all over the world. This study delves deep into the lives of these indentured workers from India who called themselves girmitiyas; it is a narrative of their experiences in India and in the sugar colonies abroad. It foregrounds the alternative world view of the girmitiyas, and their socio-cultural and religious life in the colonies. In this book, the author has developed highly original insights into the experience of colonial indentured migrant labour, describing the ways in which migrants managed to survive and even flourish within the interstices of the indentured labour system and how considerably the experience of migration changed over time.